As a former Rackets and Homicide Prosecutor, Carmen Jack Giordano conducted investigations and handled trials in the areas of organized crime, white collar crime, public corruption, and drug-related homicides. Mr. Giordano also worked for the United States Senate as a Legislative Counsel for various Senators and committees of the U.S. Senate, including Senator Joe Biden, Ted Kennedy, the Judiciary Committee, and the Government Affairs Committee, among others.  Upon returning to New York City from Washington, D.C., Mr. Giordano worked as a Senior Trial Specialist for the N.Y.C. Corporation Counsel’s Special Litigation Unit, trying some of the City’s most serious lawsuits, including wrongful death and catastrophic injury cases, throughout the five boroughs of the City.  Before forming Giordano Law Offices, Mr. Giordano worked for the Manhattan Law Firm of Levy Phillips & Konigsberg, acting as lead counsel in federal and state litigation of catastrophic tort and employment discrimination cases.  Mr. Giordano has often been a guest legal analyst on numerous news television and radio productions.

Carmen Jack Giordano has won millions of dollars worth of settlements for his clients & has been continually recognized by his clients and other organizations for his successes, dedication, and legal acumen. Mr. Giordano was most recently selected to be a 2019 New York Metro Super Lawyer, one of the highest honors in the legal field (He also received the award in 2018, 2017, 2016, 2015, 2014, and 2013); fewer than 5% of New York Attorneys are awarded the Super Lawyer Award. Carmen Giordano is an active member of The National Action Network, The NYU Law Alumni Association, The National Lawyers Guild, The National Police Accountability Project, The New York Bar Association Tort Litigation Committee, The Brooklyn Bar Association Technology Committee, The Bronx Circle of Friends, The Harlem Business Alliance, and The American Bar Association. Mr. Giordano has been an Adjunct Professor at John Jay College in New York, NY and the Co-Founder of VideoExtract.com.

Giordano Law Offices PLLC, has been successful in a great variety of areas. For more information on his more recent successes please see the Significant Cases & Media Page.  Be sure to read our reviews on Avvo (10/10 stars), Yelp (5 stars) and Google Plus (5 stars). Please also check out or testimonials on our home page to read past client reviews. 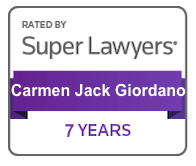